Dairy Free Slow Cooker Potato Soup is so easy to make, cooks in the slow cooker while you are away and is dairy free but doesn't lack the flavor or thickness of typical potato soup.

I have been mostly dairy free for a while now and one of the foods I miss the most would be potato soup. There had been various recipes I had tried to replicate the flavor and thickness of classic potato soup, but I never could quite get it right. Until now. Now I have Dairy Free Slow Cooker Potato Soup and I couldn't be happier.

It scored well with the family as well. Even my husband who isn't a huge fan of potato soup said it was delicious.

I had tried just using chicken broth, but it didn't taste, if you will, full enough. It needed the milk base for the true fullness of the classic potato soup. Could I? Could I really use almond milk? How would that taste and would the flavor be, well, odd?

How do we put this together?

The first step is to peel and cut a lot of potatoes. About 7-8 medium sized potatoes to be exact. Hate peeling potatoes? Not my favorite either. A peeler with a good grip and is sharp makes a big difference.

After putting the potatoes in, pour in chicken broth and either dried onions or chopped onions. I used dried minced onions I got from a bulk store and love using them. So easy and delicious.

You can also add in either ham or bacon, if desired. I used ham as I had it leftover from a great Christmas sale. The soup doesn't need either, but it does add flavor. Then, cook in the crock pot. (I have this one and I like the large size and that it is a simple turn knob. What can I say, I like simplicity!)

How do we make the soup creamy without milk?

After you cook the soup, you need to make the soup creamy and it also needs to be thickened up. The best way to do this is to make a thickening agent, like with flour and margarine. The margarine will be melted, the flour added to it, then the milk. After that, the concoction will be poured into the soup.

The soup can be served after about 15 minutes or as long as 1 hour (while on low). The soup is dairy free, but if you can eat cheese (I can eat cheese), then you can garnish with cheese. Chopped green onions would be great on top as well. 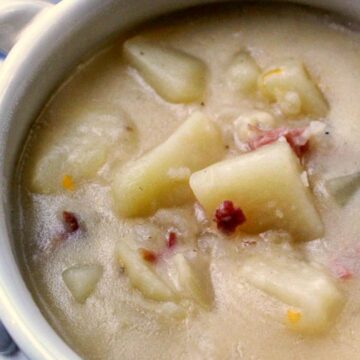