Quick Cinnamon Swirl Bread is a "quick" favorite! Easy to put together, great for breakfast or snack. Imagine taking this to a brunch? Wonderful!

Do you make quick breads at your home? This quick cinnamon swirl bread is a good place to start. It can be made for breakfast, a brunch or just for the family.

It didn't last long though, so doubling the recipe may be advisable. :-)

I don't often make just a cinnamon bread around here. Though after making this bread, that needs to change!

Blueberry bread is made a lot. Come summer time, peach bread is made as well. And if I want something that starts with already made bread? Well this pull apart cream cheese bread hits the spot.

When you can have a recipe that only takes one mixing bowl and a loaf pan, I'll take it! Like this one bowl applesauce cake (a favorite my Mom used to make!).

Tip #1: Use as much cinnamon sugar as you would like. For this recipe, I put amounts and of course, I wouldn't put 2 cups of sugar in it, but if you want to add another teaspoon or two, I won't tell. ;-)

Tip #2: You don't have to measure exactly half the batter (see below). You can simply eyeball it for half, add the cinnamon mixture, then add the other half. No one will judge, I promise!

Tip #3: For this recipe you will need a mixing bowl like this one. (I love ones with handles! Mine broke after 21 years of use and I need to get a new one.) You will also need a loaf pan and mixing spoon.

To make, simply combine all the dry ingredients into a large mixing bowl and stir together. Add in the wet ingredients. Take half the mixture and spread it in a greased loaf pan.

Bake and eat! So delicious. Make sure you take the bread out of the pan about 10 minutes after taking it out of the oven. Don't wait too long or it could be hard to remove. 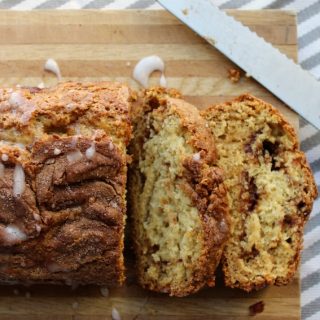