Pull Apart Apple Cinnamon Bread with apples, Craisins, biscuits and drizzled in frosting is a great snack or breakfast for the family. Soft and flavorful this bread will be a quick favorite at your house. Easy to make and so delicious!

Good things can come from a clearance item. Like when I made the Stuffed Breakfast Biscuits the other day. Fabulous recipes born from the desire to use up those deals. Gotta justify buying them, ya know.

Pull Apart Apple Cinnamon Bread came from me spying the last can of Pillsbury Biscuits sitting in the back of the fridge. They were going to expire soon and I didn't want them to go to waste.

It is also apple season and I love making recipes using apples. In fact, I enjoy all things apple. Of course, when you add frosting to any apple recipe, it is a surefire win, wouldn't you agree?

This bread recipe is so easy to make. (As is most of my recipes!) Busy families need easy recipes for their families. A little chopping, a little rolling and you have a delicious apple bread recipe.

First, chop up one apple and cut one can of biscuits into quarters.

Then take cinnamon and sugar and mix in a small bowl. Coat the biscuit pieces in cinnamon sugar mixture and place in a greased bread loaf pan.

Sprinkle dried cranberries (Craisins) on top and bake in 375* oven for 20 minutes or until biscuits are cooked through and top is browning.

The result is a delicious and flavorful bread the family can enjoy. Eat it for breakfast or as a snack. I would recommend making two for a larger family (like mine).

This single loaf lasted all of, well, 10 minutes. Two loaves would have been perfect. 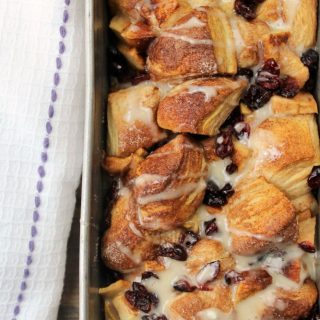