Ice Cream Cinnamon Rolls are a delicious way to start your day. Easy to make, these rolls can use store bought cinnamon rolls with only a few ingredients added, including ice cream Gooey and flavorful, enjoy these great rolls!

Ice Cream Cinnamon Rolls were made on a spur of the moment whim. I was walking through Aldi's when I thought I would buy a tube of cinnamon rolls. I generally make my own  homemade cinnamon rolls but I like to buy store bought on occasion because you never know what you can make with them.

What is in the topping?

It is almost like Monkey Bread but Monkey Bread doesn't have ice cream in the ingredients. The ice cream adds a great flavor and texture to the cinnamon rolls. This recipe is also much like the classic sticky bun recipe but much easier.

:: When you put the ingredients into the pan, you will feel there is no way the cinnamon rolls won't end up floating in liquid. Trust me, I thought that. However, it is okay. The oven will bake the liquid into the rolls and the rolls will rise. It will work.

:: When you pull the rolls from the oven, make sure you turn it out onto a pan right away. Otherwise, the mixture will harden and, well, your rolls may be forever stuck to the pan.

:: These rolls are best served warm, but they are still great later on in the day. Keep leftover cinnamon rolls covered in fridge. Reheat 15 seconds in microwave. 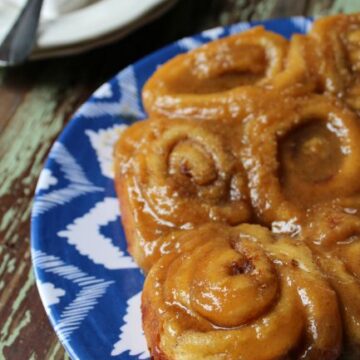