This fall recipe, Caramel Apple Bombs, can be made quickly, easily and use up those fresh fall apples. Coated with cinnamon sugar, a favorite topping for apples, this dessert is wrapped in dough and drizzled in caramel.

There are only a few ingredients in these caramel apple bombs. The store bought crescent rolls (or you could make your own crescent rolls, though that would slow the process down), apple slices, cinnamon sugar and caramel for the top are all easy ingredients to have on hand.

I don't even put butter on them, though if you want, you could. It would add a little more depth of flavor, however I was going for the less calorie recipe.

What about the apples turning brown?

Usually, when I make a recipe with apples, I like adding Fruit Fresh to the apples. It is a vitamin C (ascorbic acid) based powder that helps any fruit to turn brown. I use it often for fruit salads or when I freeze peaches.

I don't feel it is necessary to add it to the apples in this case as the apples are cooked quickly and is covered in cinnamon sugar, but if you want to, it certainly doesn't hurt anything.

It is so simple to put this apple dessert together. First, you cut, peel and slice the apples. Then, sprinkle cinnamon sugar on top. Roll out the crescent rolls on an ungreased baking sheet and place the apples on top.

Then just wrap up the apples using the dough. I placed the apples at the wide end of the dough then rolled them up. Then I just folded the leftover dough around the apples.

I then sprinkled more cinnamon sugar on top of the dough for baking. After that, they went into a 375* oven for about 12-15 minutes. Long enough for the dough to firm up but you don't want the dough to brown too much on the bottom.

Nobody is a fan of that.

The toppings for this can range from just the caramel to cool vanilla ice cream. Caramel ice cream would work great too. I haven't tried it, but to go out on a limb here, pumpkin ice cream might hit the spot too! 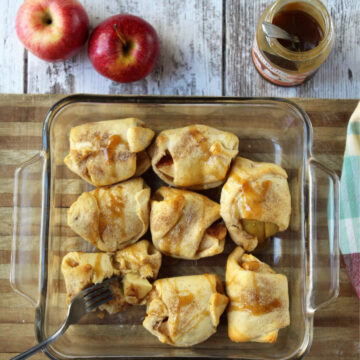