Rich and creamy cheesecake with flavors abounding in every bite. That is what you get when you make this Eggnog Cheesecake. Eggnog is the taste of Christmas and now you can enjoy it in a baked form. This dessert recipe is out- of-this-world good.

I think I found a new winner, folks. My husband told me this Eggnog Cheesecake just might be his new favorite. The cheesecake recipe has stiff competition, with Cherry Cheesecake or Turtle Cheesecake as competitors.

But, he is an eggnog fan. Put the two favorite flavors together and he is happy.

Eggnog is a drink, made around the Christmas season, made of milk, cream, sugar and eggs. It is rich and creamy.

Eggnog also has nutmeg and cinnamon in it as the common spices. This drink has a kick to it and it is often offered at Christmas parties.

A more complete list of ingredients and measurements is in the recipe card.

What kind of eggnog should I use?

The eggnog I used has a vanilla spice flavoring added to it. Any eggnog would work, though one with extra vanilla flavoring works well with this recipe.

The graham cracker crust is so easy to make and we have a complete recipe with instructions.

What you will need is graham cracker crumbs and butter. Some add sugar to their crust, I typically do not.

The graham cracker crust will need to be placed in a 9 inch springform pan. If you are a cheesecake maker, you need to buy one of these pans as they make removing the cheesecake from the pan easy.

How to make an eggnog cheesecake

Start by making the crust and placing it in a lightly greased springform pan. The graham cracker crumbs just need to be placed on the bottom and up the sides of the pan.

Next mix together the cream cheese and sugar using a stand mixer or hand mixer.

Blend the eggnog, flour and spices in with the cream cheese mixture. Add in the eggs, one at a time, blending after each addition.

*Let the cream cheese soften on the counter for about 20 minutes before starting the cheesecake recipe. It makes stirring the batter together easier.

**While the mixture is mixing, be sure to scrape the sides down then continue to mix.

Bake the cheesecake for 50-55 minutes at 325 degrees or until center is set.

How to prevent the splitting of the cheesecake

Let me guess, you have made a cheesecake before and you are at the end and it splits down the middle for you!

Yup, happens to me too.

The best way I have found to prevent the splitting of a cheesecake is to cook the cheesecake at a lower temperature such as 325 degrees instead of 350 degrees.

A completely optional step is adding whipped cream to the top of the cheesecake, then sprinkling the cheesecake with cinnamon. It is personal preference.

Can I use pumpkin eggnog for this cheesecake recipe?

Could I use a gingersnap crust?

Yes, that would be delicious! Just replace the graham crackers with crushed gingersnaps. 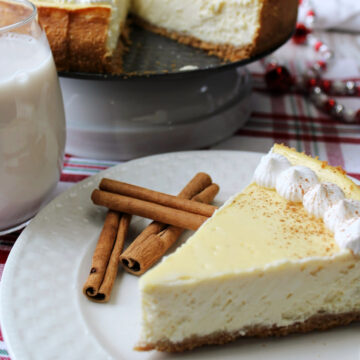 After the cheesecake has cooled in the fridge, you can spread whipped cream on top if desired. Here is a more in depth recipe on how to make a graham cracker crust.